How REITs use Foot Traffic

We created a Tableau workbook visualizing foot traffic performance at the properties of two top REITs from January 2019 to October 2021.

For this study, which we designed for REITs, we created a Tableau workbook visualizing foot traffic performance at two of the country’s top senior living brands from January 2019 to October 2021. 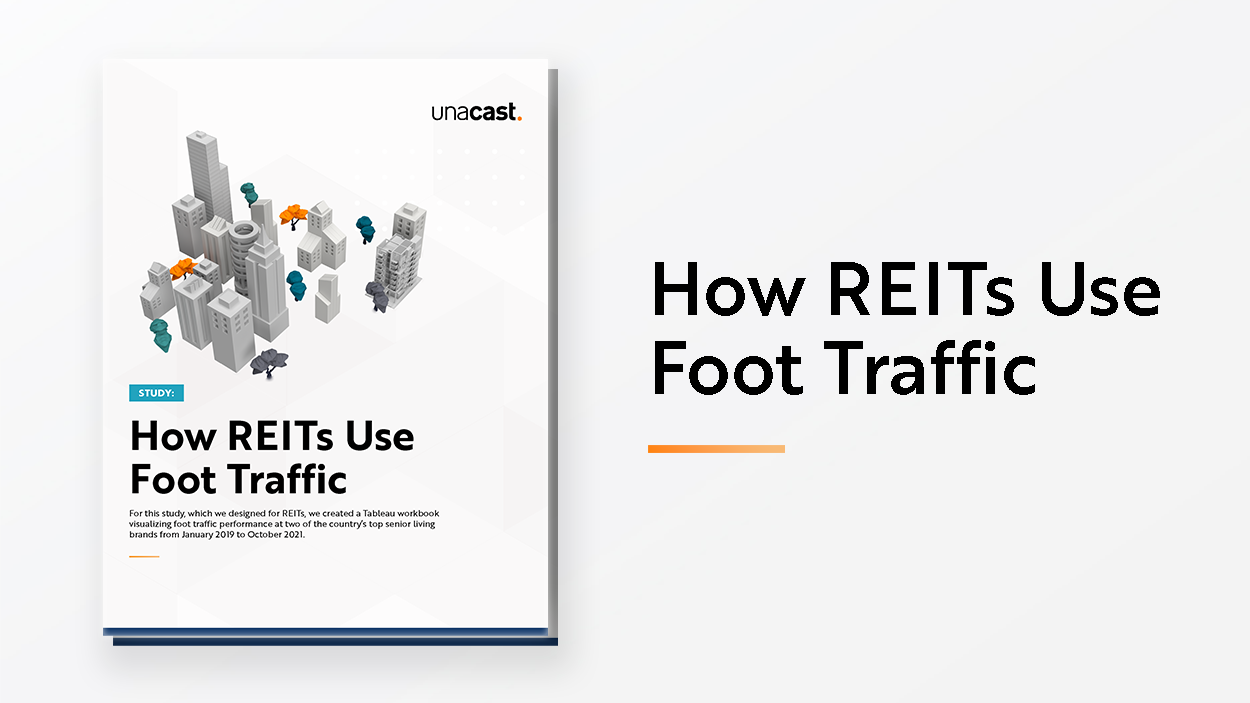 Starting in 2019 allows us to see how the senior living facilities were performing for a year before the pandemic, how COVID disrupted them, and where things stand today. Let’s dive into the data to understand how.

Sunrise Senior Living and Brookdale Senior Living foot traffic has fluctuated over time, what regions and metro areas are overperforming, and how the brands (or their competitors) can use the data to their benefit.

Using Unacast’s map of visitation data, we can see that since January 2019, Texas is the state where Brookdale has received the most foot traffic. For Sunrise, California takes the top spot. We can also break the data down into a more granular geographic scale to further understand which locations are receiving the most visits. Brookdale’s highest performing metro area is Chicago. And although Sunrise does well in California, the company’s highest-performing metro area is on the opposite coast, in the New York-Newark-Jersey City triad.

Despite their broad equivalence in terms of geographic reach, the two brands operate on different scales. Brookdale boasts 675 senior living communities and around 60,000 residents across 41 states. Sunrise, by contrast, is about half that size: 325 communities serve around 30,000 residents across 31 states and Washington D.C. At present, there are 28 states where both Brookdale and Sunrise have locations. Given that Brookdale has nearly twice as many locations as Sunrise, it is not surprising to see that Brookdale pulls in more foot traffic than Sunrise in 20 out of the 28 states where the two are in local competition.

However, examination of the foot traffic data collected from each assisted living brand’s residences paints a far more competitive picture of the two companies than these initial numbers would suggest. Unacast’s foot traffic visualization shows that Sunrise can do a lot with less comparatively speaking. A closer look at the map shows that Sunrise’s facilities tend to be concentrated around a state’s major urban centers, where they often outperform the Brookdale locations there. By isolating and comparing the total visitation data just from these two companies, we can see that Sunrise carries the majority of the total foot traffic in these cities:

Brookdale’s reach, however, spans beyond the largest cities in most states, offering locations in a wider range of mid- to smaller-sized metro areas. For example, in Louisiana in 2019, Sunrise by far surpassed Brookdale in terms of foot traffic in the state’s two major cities, claiming 86% of the total visits reported between their locations in New Orleans and Baton Rouge (150,364 total visits to Brookdale’s 21,727). However, over the course of that year, Brookdale enjoyed more of Louisiana’s foot traffic overall: They pulled in 191,909 visitors between five cities across the state, four of which are mid-sized locales where Sunrise has no presence.

Insights can prove fruitful for both companies particularly as we move further into the recovery phase of the pandemic. Given the high risk that COVID posed to older adults, senior living brands nationwide suffered large human and commercial losses during 2020. The cost of the virus is made apparent in our maps of foot traffic data over the past 34 months. Locations from both senior living facilities nearly universally show a steady decline in visitors from the start of 2020, with a steep drop-off in April, when many states issued formal lockdown orders and social distancing was most intense.

The data from Brookdale and Sunrise’s locations in the Detroit metro area, for example, both register this drop: Foot traffic for both companies in April of 2020 is one-third of the amount that their locations reached in November 2019.

On the brighter side of things, so too does the data show the positive impact of vaccination: in many regions, graphs of foot traffic also show a marked uptick in visitors beginning around April 2021, coinciding with the early 2021 emergency authorization of Pfizer and Moderna’s vaccines. With more and more Americans becoming vaccinated as the year goes on, senior living brands have been able to not only take on more residents but to welcome the range of non-resident visitors that form a part of daily life in these communities. For senior living brands, analyzing how and when gains arise in foot traffic data can help businesses better adapt their practices to the “new normal” of the pandemic’s recovery phase.

For example, a company might examine how visitation data figures align with state or regional vaccination rates: If foot traffic significantly lags behind vaccine availability or distribution numbers, what steps could be taken to safely encourage reengagement of residents with the community?

Bear in mind that high visitation rates are likely to be correlated not only with greater business but also with happier customers, which drives retention and long-term revenue.

The past eighteen months of visitation figures can also point senior living brands to where they are overperforming, helping them research what they’re doing well in order to replicate it elsewhere.

Data from Sunrise residences in the Detroit area tells a story of gradual recovery. Visitation data from the start of January 2021 had already hit a level double that of July 2020, Sunrise’s lowest numbers of the pandemic. But by August of 2021, visitation reached a height not seen since November of 2019. Clearly, something is going well: Sunrise might follow up with residences in that region and investigate what practices have allowed for these gains.

Detroit’s Brookdale locations experienced a slower and less stable rebound. Foot traffic increased no more than 50% from the worst COVID numbers until the end of February 2021, but then, visitor numbers shot up to nearly 400% of what they were in July 2020, surpassing even the brand’s regional November 2019 numbers. But this dramatic recovery was short lived, as by August of 2021, visitors were down to half the number they were in February. This is a call for some more investigation: what led to this sudden spike in visitors at the end of February? Digging into details at a location-by-location level, the company might learn who was responsible for this surge — prospective residents? Freshly vaccinated loved ones? Staff from a temporary contractor? — and thus how to replicate it, ideally for the long term.

Here’s a summary of our recommendations for Sunrise and Brookdale:

The data here marks the beginnings of what the Unacast foot traffic intelligence platform can teach REITs about the performance of real estate portfolio assets. Unacast can help REITs dive much deeper into the data to identify granular indicators.