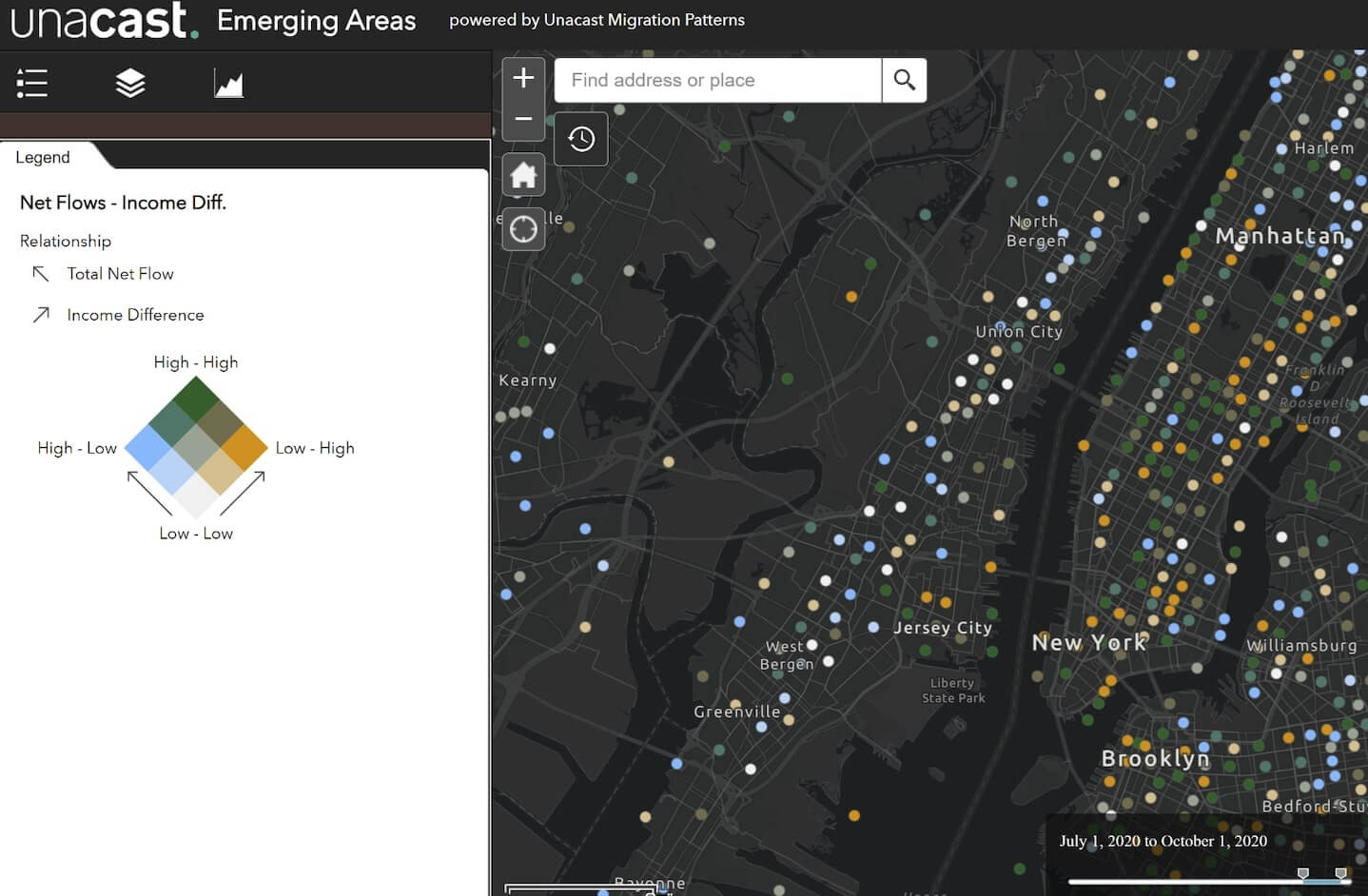 Today, we introduce Emerging Areas, our latest solution to understand human mobility and migration in the COVID-19 age. Emerging Areas is not a UI, it is a dataset, or more specifically it is a lot of datasets made up of GPS data collected with user opt-in consent and aggregated from millions of smartphones across the US.

What Emerging Areas can do that no other solution can is track actual migration and help you measure the economic impact.

Up until today, you could use our tools and datasets to look at how people were moving around in a neighborhood, city, or state compared to previous dates and get some sense of who they were. Now you can look at the same area and also see:

In short, you can now quantify the net migration flow of a given area and compare the relative income levels of the persons coming and going.

Let’s examine a couple neighborhoods in New York and Chicago to get a sense of what Emerging Areas can tell us about migration patterns there.

From a few simple data points, we are able to extrapolate an enormous amount of information. Looking at New York’s Tribeca neighborhood, we can quickly see the speculation that people are leaving the city is well-grounded in human mobility data. Even more importantly, we can see the average median income for each group of people -- those who are leaving the neighborhood and those who are moving there.

In this neighborhood, which has a median average income of about $140,000, around 3,900 people have migrated away in the last 18 months. That’s versus an inflow of about 3,450 people from areas with an average median income of about $82,000.

So, net-net, the total impact to the neighborhood is a loss of 550 people. Has the income associated with those people also disappeared, and if so, what does this mean in terms of the impact on property values and how consumers will spend with area retailers and restaurants?

Conversely, this migration pattern also seems to open up Tribeca to retailers with slightly less affluent target audiences. Additionally, multi-family residence landlords and families in general may find a once previously inaccessible neighborhood now open to them. Either way, with a net-negative migration flow and a downward acceleration trend, the economic consequences may be huge.

We uncovered something interesting when we examined the E Water St neighborhood in downtown Chicago Though Total Traffic is recovering in all other categories, foot traffic from Residents in this neighborhood has been slowly falling since the pandemic began -- now down 60% compared to 2019.

Until now, we could offer theories as to why this was, and where Residents had gone to, but not enough hard proof to make us happy in accounting for this and other such anomalies. New insights from our Emerging Areas dataset changes that for good.

We can now see that about 400 people have migrated away from the area since the pandemic began. That is compared to about 300 that have moved there; a net outflow of -100.

The average median income for the whole neighborhood is about $117,000, but the new Residents moving in over the same period come from areas where the median income is less than $90,000

From this, we can discern that, given this influx of migrants from comparatively-lower income areas, it is likely that the average median income here will drop. This also implies that the relative buying power of new people to the neighborhood is likely less than those who left.

From there, it is not difficult to get into range of assumptions worth exploring, specifically: local real estate markets may be negatively affected by a continued net-negative migration flow, and neighborhood retailers and restaurants will likely face negative pressure on pricing thereby foreshadowing more business failures, placing downward pressure on commercial real estate leasing markets.

Put these insights together with data from the CRE or retail industries and you are equipped with a powerful launchpad for using human mobility datasets in a range of use cases.

Use Emerging Areas as an analysis tool for commercial real estate to know - for a fact - which neighborhood is Hot and which is Not.

One fascinating trend that jumped out as we sat back to look at migration data from more than 900 locations across the USA is the tremendous impact that People with Money (PwM) can have when they migrate from the big city to smaller cities and towns. We’ll use two current inward-migration leaders as examples to make the PwM point: Stockton, CA and Whitewater, WI.

Stockton, CA is a city of about 317,000 located an 80 mile drive inland from San Francisco. The median average income here is about $60,000. Since March 31 2020, a few weeks into the pandemic, Stockton has experienced a net migration gain of about 650 people. Percentage-wise, that is only about two-one-hundredths of 1 percent (.02%), prompting a So what?

The thing is, those 650 people that moved to Stockton came from areas with a median income level of about $71,000, which is $11,000, or 18%, more buying power than the average person already living in Stockton wields.

650 net people earning $71,000 moved to Stockton between March 31 and September 30. Assuming the average median salary for each person, that is more than $46 million in new local buying power in just 6 months.

There are also more people for shops and restaurants to cater to, and the town’s average median income and tax base are going up. This is the People with Money effect. it is happening all across America and the effect may be even more pronounced in smaller towns.

Whitewater, WI is a town of about 14,500 located about 55 miles west of Milwaukee. The median average income here is about $60,000. Since March 31 2020, Whitewater has experienced a net migration gain of about 345 people. That is an additional 2.5% population in six months -- a significant uptick in any market.

When we look at the average median income in the areas that Whitewater’s inbound migrants are moving from ($67,000), we see they bring about an extra $7,000 each in income with them versus current residents. That extends to about $2.4 million in new local buying power. That’s much less than the net dollar gain in Stockton, but spread out over a much smaller population, which indicates local impact will be greater.

A ground swell of opportunity for some small towns and a slow descent for big cities. That’s what real migration data points to seven months into the pandemic era.

How Emerging Areas can help

For a given geographic area in a given timeframe, our Emerging Areas / Hot Markets dataset examines the inflow and outflow of people and their income and classifies the area’s growth and change in composition.

As with all of our datasets, Emerging Areas uses recent and historical data and is frequently updated, so there’s less time spent combining disparate datasets and tools to assess the performance, or value, of a given location, or market. This means:

Emerging Areas is a giant leap ahead in your ability to understand and plan for human migration.

Please look for more about Emerging Areas soon and feel free to contact us and ask how Emerging Areas can help your organization leverage the power of location data insights to understand how human migration affects your business.