The office industry claims to be gaining but the data largely says otherwise. Visits to shared office spaces are down nearly 10% since the start of June 2021. Some states, cities and brands have been hit harder than others.

Since the beginning of the COVID-19 pandemic in North America, two competing narratives about return to office have jostled for attention and authenticity. Depending on who you believe, either the traditional office is ready to die, or newer community-styled co-working spaces are set to boom. 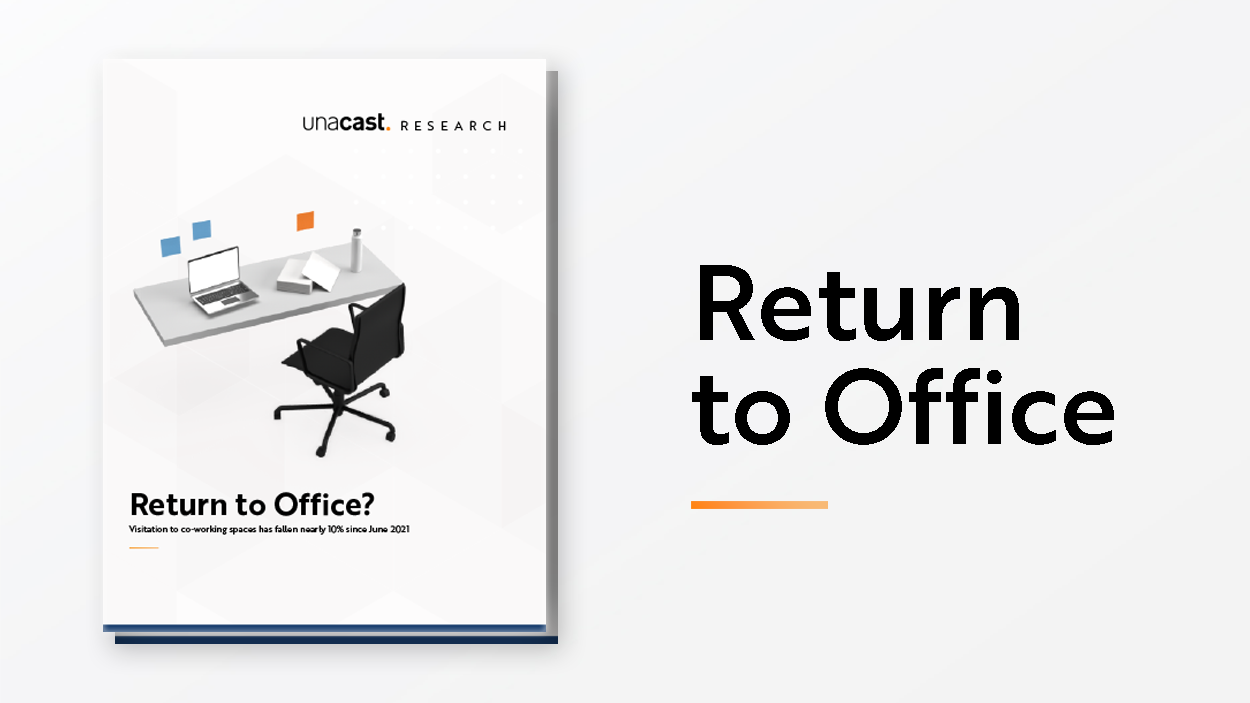 We studied foot traffic patterns from June 1 to September 20 2021 for 11 operators of 755 shared office spaces all over the US. The brands we studied are CarrWorkplaces, Galvanize, General Assembly, Industrious, MakeOffices, Regus, Seren-dipity Labs, Spaces, TechSpace, The Yard and WeWork.

The co-working office industry claims to be booming but the data largely says otherwise. Visits to shared office spaces are down nearly 10% since the start of June 2021. Some states, cities and brands have been hit harder than others.

We studied foot traffic patterns for 11 shared office space operators, including Regus and WeWork, in order to find out what’s behind the market downturn. Use the interactive map to study the data and get insights to answer:

Since the beginning of the COVID-19 pandemic in North America, two competing narratives about return to office have jostled for attention and authenticity. Depending on who you believe, either the traditional office is ready to die, or newer community-styled co-working spaces are set to boom.

We studied foot traffic patterns from June 1 to September 20 2021 for 11 operators of 755 shared office spaces all over the US. The brands we studied are CarrWorkplaces, Galvanize, General Assembly, Industrious, MakeOffices, Regus, Seren-dipity Labs, Spaces, TechSpace, The Yard and WeWork. Some of these are nation-wide operators, others only own property in a handful of markets.

Some of these brands, e.g. Regus, fall into the mould of a large building serving a handful of enterprise clients in a setting with common amenities or points of access. Others, such as WeWork, are modern, purpose-built co-working spaces-slash-community hubs catering mostly to startups and entrepreneurs. In each case, exposure to lots of people outside of your business but well within your environment is all part of going into the office.

To pull the data for these insights, we used Unacast Now. To visualize it, we built a Tableau workbook with some interactive maps and charts that let you zoom-in and out at the state, city and brand level. You can follow along in the Tableau workbook as we go through the insights; for ease of use, each section references a specific tab.

We’ll begin by reviewing co-working visitation traffic patterns from a national level, before zooming-in to shed light on the most competitive state and city markets, and taking a deep dive on individual brand performance, with particular attention paid to comparing Regus and WeWork’s relative performance.

We studied foot traffic patterns from June 1 to September 20 2021 for 11 operators of 755 shared office spaces all over the US. The brands we studied are CarrWorkplaces, Galvanize, General Assembly, Industrious, MakeOffices, Regus, Serendipity Labs, Spaces, TechSpace, The Yard and WeWork.

The states with the highest rate of co-working space visitation are, in order: California, Texas, New York, Florida, Illinois and Georgia, which together accounted for nearly 4.2 million visits in June 2021. That peaked in July at about 4.7 million, before crashing back to around 3.9 million by September.

In each case, statewide figures are heavily influenced by the largest city contributor but there are plenty  of variations on that rule when you move to smaller markets.

While co-working visitation is down on the whole, some areas recorded noticeable growth of foot traffic to shared office spaces between June and September 2021. Smaller cities, including Montgomery, AL, and Aurora, CO are up over 50%. Detroit (+32%) and New Orleans (+20%) are mid-sized cities with noticeable growth against the national trend, while Boston (+4%), Austin (+8%) and Arlington, VA (+11%) also have recorded growth during a time of contraction.

The table below shows visitation data broken down by brand. In each, opening visitation for June 2021, final visitation for September 2021, the percentage difference, as well as example properties that are above and below trend for the MSA are noted. A quick scan will tell you that there are a number of markets where some brands are either making up ground, or losing it fast, against the area trend.

CarrWorkplaces, firmly entrenched in the middle tier of our co-working cohort, is doing a little better than most at -6.9% traffic vs. the -9.4% national trend, and up sharply in the faltering Chicago market, but down significantly in the growing Los Angeles market area. Similarly sized Serendipity Labs (-5.0%) also fares better than the national average, while category peer General Assembly underperforms the pack at -12.7%, despite a somewhat miraculous growth curve in hard-hit Washington, DC.

Galvanize, MakeOffices, TechSpace and The Yard

In the tier of smaller co-working operators sit Galvanize, with 10 locations measured, MakeOffices (7), TechSpace (8) and The Yard (4). Galvanize is among the hardest hit of all brands  since June 1 2021, with a loss of some 18% of foot traffic; Galvanize shows relative strength in their Phoenix location, while trailing the market in Seattle and elsewhere.

MakeOffices ranks squarely at the bottom in terms of total traffic loss in the same period, down a full 25% in just four months time, and not a single location showing growth since June 2021. TechSpace has fared much better, down just 4% compared to the 9.4% national trend, with peculiar strength in the Bay area market. The Yard, which is limited to four locations in DC, New York, Brooklyn and Philadelphia, is down about 11%, with only the Brooklyn location showing relative growth (+18%).

The lone entrant in the middle tier of co-working space competitors, Industrious drew about 534,000 visits to the 49 locations we measured in this study. That’s a fair bit of traffic but still down 10.5% between June and September 2021. Below trend is Industrious’ Tampa location (-38%), while the brands’ Pasadena location (+54%) is over-performing at the start of  Q4 2021.

The two largest competitors, Regus and WeWork, compete head to head in several battleground markets. Across the key states of California, Florida, Georgia, Illinois, New York and Texas, Regus holds  a firm lead. This holds true for most, but not all, big city markets.

While out-visited by Regus more than 3:1 on the whole, WeWork manages to outdraw Regus in multiple major markets, including New York City, Boston and Seattle. Whether this is due to a more established area brand, or the proclivities of a more tech-focused clientele, these battleground wins against a much larger and more-established competitor are notable for WeWork.

The data is in and the results are clear. As the global pandemic crosses into its 18th month, Americans are not returning to office environments in the manner that was hoped. Further, there is no broadscale boom in shared co-working spaces, i.e. WeWork style hubs are not suddenly filling up, though that brand’s loss of foot traffic is less than their peers.

Perhaps work from home truly is the new norm. More and more companies are turning to that option with either limited, occasional in-office time, or

the offer of support for those who want the shared workhub experience sometimes. In any event, there is no statistical evidence that a return to office is happening, nor do current trends portend that future.

Total foot traffic to shared workspaces is down both nationally and in every key state we measured.

Ditto for visitation patterns in most major cities. A few smaller cities present as outliers to this trend — perhaps a nod to the growth happening in some areas as a result of the exodus from more congested areas.

Either way, the number of properties presenting as growing pales compared to the number where foot traffic is contracting — a clear indication of risk for analysts and investors with these office brands and others in their portfolio.

Property owners and developers must either double-down on their investment to make co-working spaces more attractive and relevant in the long term, or void their portfolio of properties where the data says the out of office trend is likely to be permanent.