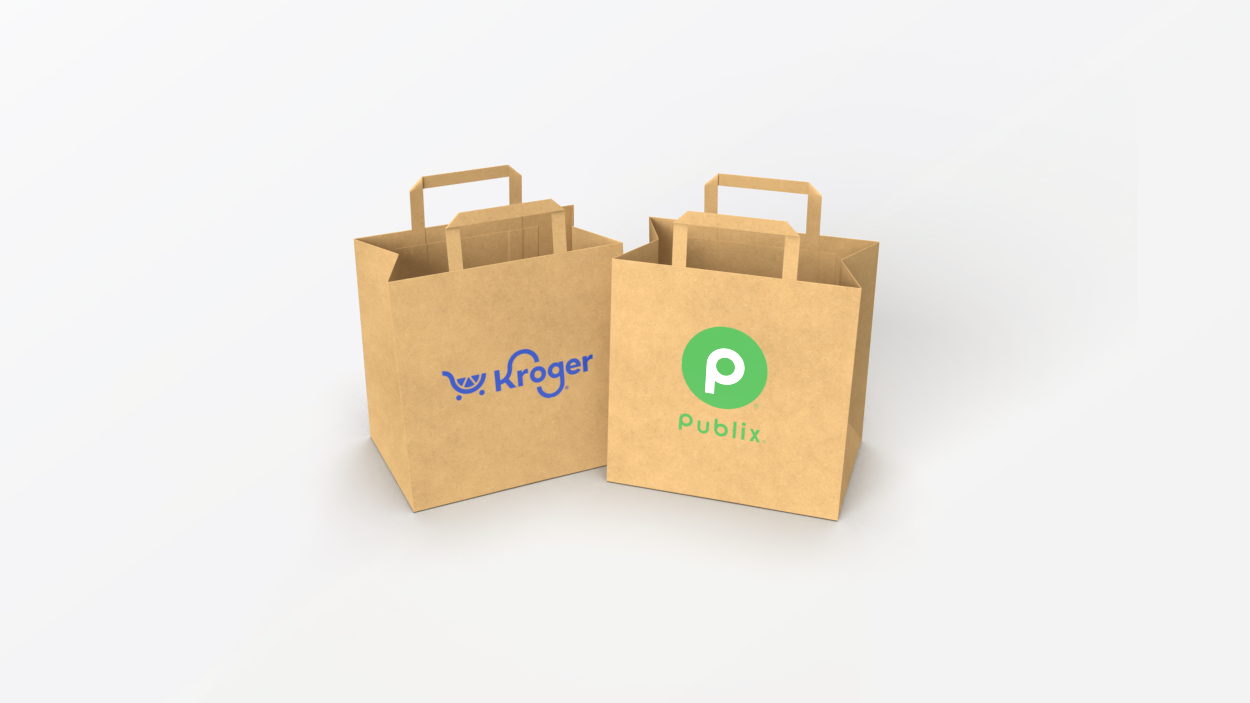 This post will explore grocery store foot traffic with two of the most popular grocers: Kroger and Publix. As the price of groceries continues to climb in Q1 of 2023, how are consumers adjusting their behavior, and what does this mean for two of the United States’ most recognizable grocery brands?

We examined historical retail foot traffic data from Q1 of 2021 and 2022 for Kroger and Publix. These two grocers go head-to-head in a handful of states. Is either benefiting from, or suffering at the hands of, the current economic climate?

How can each brand learn from the other’s foot traffic data to inform their own competitive intelligence? What are the gaps that need to be filled in before these insights can be actioned?

Below, we’ll start with a look at each brand’s relative national presence and foot traffic, before zeroing-in on a handful of key market battlegrounds for 2023, and suggesting a few ways to interpret these insights for competitive intelligence purposes.

In terms of total foot traffic, Kroger is the dominant brand vs. Publix at the national level by a ratio of about 2:1. This is largely due to Publix primarily restricting its operations to the south and southeast, whereas Kroger also has presence in the Great Lakes region and Central states, including Texas.

In the four states where the two grocers have meaningful head-to-head competition (TN, SC, AL, GA), Kroger wins two (TN, GA), and Publix wins two (SC, AL). The most competitive state market is Georgia, where Kroger holds about a 3:2 edge in total foot traffic, though there are key battlegrounds within the state, which we will examine below.

Publix punches against its weight foot traffic wise in a small, but important handful of Georgia’s counties, including Cobb, Forsyth, and Fulton. What makes each of these markets unique? Location.

In the north central part of the state, Cobb County, Publix draws nearly 47% of the total traffic split with Kroger, a full 7% better than its statewide average. This is despite a strong brand affiliation for Kroger just across the border with Tennessee to the north -- the only other competitive state market that Kroger wins.

This tighter localized competition continues just to the east in adjoining Fulton County, home at Atlanta, where Publix records about 48% of the local foot traffic in a typical Q1. This metropolitan strength no doubt influences both Cobb and adjoining Forsyth County, where a Publix commands 44% of foot traffic share.

Success in Atlanta, Georgia’s largest market, is clearly essential for Publix to capture a greater overall percentage of foot traffic statewide. Based on 2021 and 2022 trends, the best time for Publix to do that may come near the end of March 2023, when, if history is an indication, both brand’s traffic is likely to be around its quarterly low. That may sound like weird marketing mojo but down markets are often when consumers change their behaviors, i.e. where they shop, how often, and how much they spend.

The other thing that seems clear is that Publix’ strength in the Atlanta market resonates into adjoining counties and markets, e.g. Cobb and Forsyth. This would indicate that expansion through the north central part of the state in other meaningful markets may be an advisable course of action. This may indicate the need for further research into local catchment areas, competitive intelligence scenarios, or perhaps site selection options guided by further foot traffic and behavioral insights.

As to Kroger specifically: Q1 2022 foot traffic dipped as low as -14% vs the same period in 2021. That’s a bad hit that had serious implications for revenue and operating profit. By comparison, Publix overall traffic dipped about -16% year over year, but its rate of decline over Q1 was a bit slower, i.e. Kroger fell sooner but flattened.

Was this year over year decline, which has reverberated throughout the retail grocery industry, a portent of things to come in 2023 as we navigate a recession? If the answer is yes, then we have to expect Q1 traffic will peak around mid-February, declining to a quarterly low at the end of March. This will impact Q1 earnings for both Publix and Kroger, and affect share price, and competitive strategies, including opening or closing of locations.

You can study other competitive grocers, pharmacies, restaurants and many other brand verticals by checking out our blog, or case studies, or contacting one of our location data experts today for a free consultation.