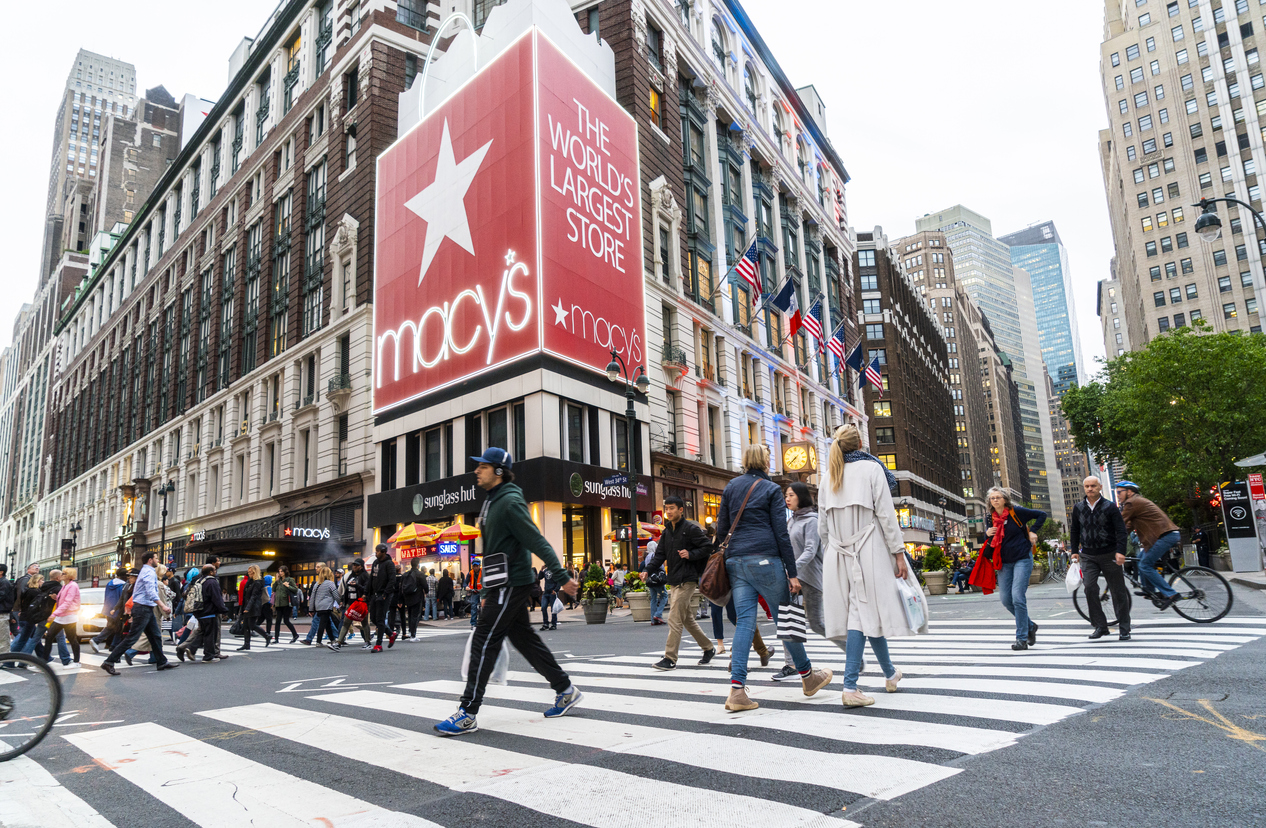 For this post, we created a Tableau workbook visualizing foot traffic performance across two of the nation’s biggest department store chains, Macy’s and Nordstrom, between November 2019 and November 2021.

Looking closely at the visitation data these stores recorded over the past two years can help us visualize areas of regional competition between the two brands, understand how the pandemic has affected the holiday shopping season, and consider takeaways for retail marketing and operations in the post-pandemic era.

A Lopsided Battle of Retail Giants

Both Macy’s and Nordstrom are two of the nation’s longest-standing department store chains, each brand founded well over 100 years ago: Nordstrom in 1901 and Macy’s in 1858. While both brands are household names in commercial retail, Macy’s is by far the bigger player in nationwide performance.

Location is a big factor in Macy’s high numbers: they operate in all but six states in the US, while Nordstrom only has locations in 29 states nationwide.

When we look at the metropolitan areas where the two brands are in direct competition, the larger retailer still by far seems to come out on top. In the 40 metro areas where the brands both have locations, only in eight of them does Nordstrom draw more than 30% of the two brands’ combined store visitors in this two-year period:

These numbers can point us toward a couple of potentially useful lines of inquiry. It’s notable that even where competition between the two brands is most active, Macy’s still appears to draw far more shoppers than its rival.

Only in three cities do the two brands come within a 10% range of 50-50 parity in foot traffic during this two-year period.

It’s possible that Nordstrom is enjoying a bit of hometown support in Seattle, where it was founded in 1901, but even there Macy’s commands more than half of visitation traffic.

Most significant is that Durham-Chapel Hill appears to be the only metro area in the country where Nordstrom stores have actually received more visitors than Macy’s stores since November 2019. Equally notable is that Nordstrom’s share of the foot traffic data in Durham-Chapel Hill is more than ten percentage points higher than its next most-competitive metro area, Seattle.

Clearly, something about Nordstrom is playing well to the crowd in Durham-Chapel Hill. Nordstrom might investigate why it is performing well there and seek to replicate that performance in areas with similar demographics. Perhaps there’s a marketing difference accounting for the gap between Nordstrom’s performance in this metro area and others; further investigation may reveal what lessons are to be learned — and copied.

Additionally, this way of visualizing foot traffic data shows us that when it comes to a Macy’s-Nordstrom match up, Nordstrom makes its biggest gains in states in the south: North Carolina, Texas, Tennessee. This could prompt Macy’s to reexamine its marketing and operations initiatives in those states or across the region.

Holiday Retail Before and After COVID

Comparing the ebbs and flows of foot traffic data from the past two years can help retailers measure how much the pandemic has affected the industry’s most critical season and adjust perspectives and strategies for approaching the holidays in the post-pandemic era.

First, let’s take a look at the nationwide totals of foot traffic recorded by each of these brands from December of 2019 and 2020:

Despite the pandemic rebound that the winter months brought, Macy’s and Nordstrom holiday shopping foot traffic seems little affected: December 2020 shows only marginal dips in visitation numbers for each brand. Indeed, looking at the graphic visualization of the foot traffic data, we might be surprised to see that the 2020 traffic peaks appear to reach as high as those in 2019.

However, there is a notable difference in traffic flow during weeks running up to these peaks in 2019 and 2020. In 2019, we can see micro-peaks and -valleys in the last three weeks of November: Traffic ebbs and flows, jumping up and then dipping in the wake of Black Friday before steadily climbing up again to peak in the last week of December. In 2020, by contrast, when foot traffic reaches its peak for Macy’s and Nordstrom in the second week of December, there’s almost no lead-up: visits rocket up by more than 200% for around a week and then drop back down to the stable level they’d hovered around for the rest of November.

What does this tell us about the pandemic’s effect on the critical holiday shopping season?

First, it seems that despite everything, maybe COVID didn’t steal Christmas — at least from Macy’s and Nordstrom. It’s clear that the virus alone was not enough to deter consumers from taking part in shopping during the 2020 holiday season.

But our analysis suggests that there has been a change in when and how consumers are willing to take on the relative risk of in-person shopping. In December 2020, customers were more selective with shopping times, rushing into stores one week before Christmas — perhaps when they no longer had time to wait for online deliveries — but not lingering in them weeks in advance. This insight could help retailers better manage their inventory, prepare for the week-before-Christmas rush, and perhaps craft marketing campaigns to incentivize early shopping in hopes of smoothing out crowds.

As for this post-pandemic year, the latest data, ranging from early October to early November, tells us the following about the two retailers’ performance year over year:

This comparison indicates that store traffic early in the holiday season grew substantially from 2020 to 2021 — about 32% in the case of Macy’s and 12% in Nordstrom’s. This contrast complicates the December data, which showed not a huge difference in the absolute number of visitors to these retail locations in 2019 and 2020.

Perhaps the big difference COVID drives in foot traffic is less visible in December — when people have little choice but to go in store to get things at the last minute — and more so early in the holiday season, such as in October, when shoppers can simply order online to avoid COVID last year.

Here are some of the recommendations we can draw from the data:

This analysis only scratches the surface of the retail analytics location intelligence can power. Unacast’s data scientists can work with Nordstrom, Macy’s, and other retailers to dig deeper into the data, obtaining a more profound understanding of retail trends and the factors driving them.