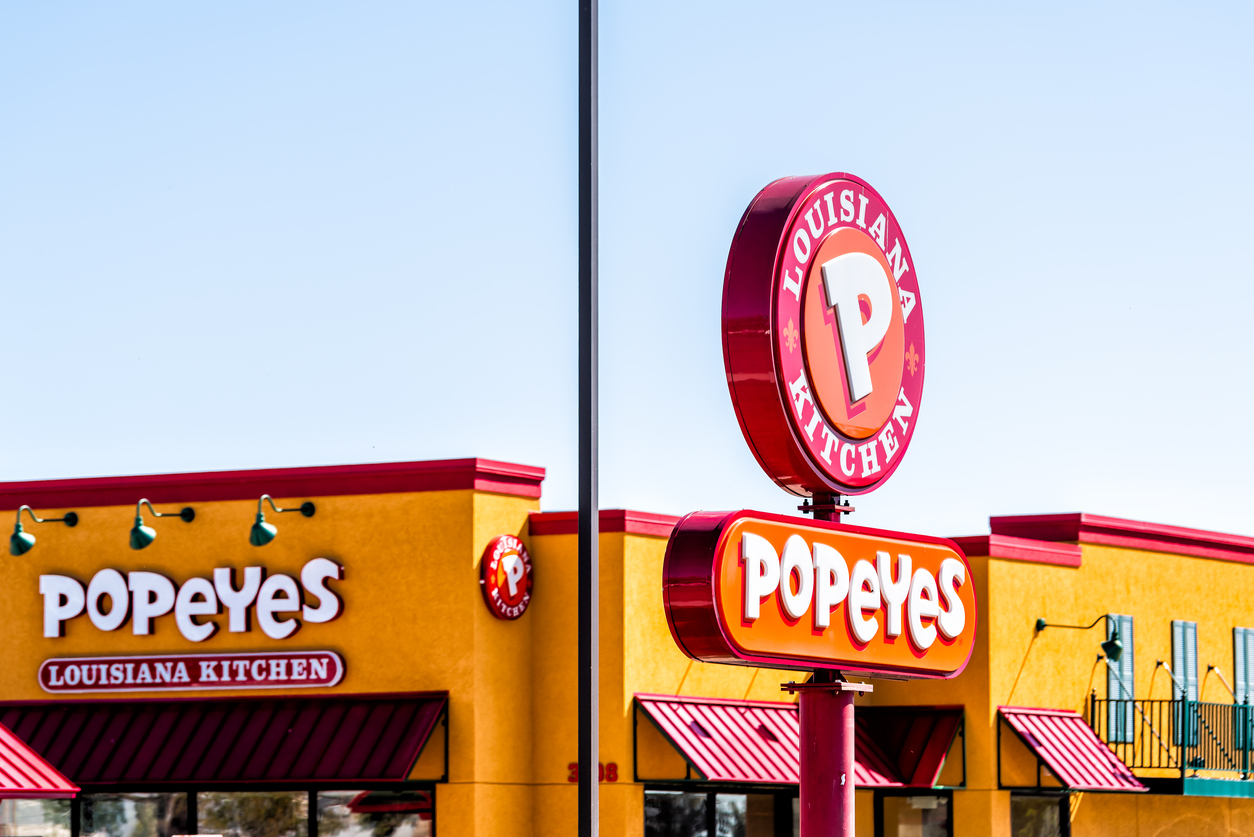 The first week of November 2019 marked by far Popeyes’ highest-ever week of foot traffic. But how has visitation at Popeyes fluctuated since the start of Covid-19, what regions and metro areas are overperforming, and how can Popeyes and their competitors use the data?

Want to starting using Unacast Now? Submit your email below and do your own analysis.

In this post, we created a Tableau workbook visualizing foot traffic performance for Popeyes locations across the US from November 2019 to August 2021.

Let’s dive into the data to understand how visitation at Popeyes has fluctuated over time, what regions and metro areas are overperforming, and how Popeyes (or their competitors) can use the data to its benefit.

The topline data from our Tableau workbook tell a story of the pandemic.

In spring 2021, traffic sharply rebounded, likely reflecting the impact of the COVID vaccines and loosening social distancing restrictions. Visitation jumped from 470,000 in February 2021 to 580,000 in May and hovered around 600,000 for three months. But by July and August, foot traffic had sunk to about 450,000, perhaps reflecting caution surrounding the Delta variant.

Popeyes’ full name is Popeyes Louisiana Kitchen, and its popularity in Louisiana suggests the people of that state are happy to claim the restaurant as their own. Despite being the 25th most populous state as of the 2020 Census, Louisiana appears to be Popeyes’ third largest state market with about 35,000 people visiting Popeyes locations on an average week early this summer. Popeyes’ top performing states are Texas, California, Louisiana, Florida, Georgia, New York, and Illinois. The restaurant’s top-performing metro area nationwide is that of Houston, no doubt reflecting both the city’s size and its proximity to the Pelican State.

While Popeyes’ synergy with its home state customers makes sense, the chain might wonder whether it has room to increase performance in states that are much bigger than Louisiana by population and contain similar audiences.

For example, consider North Carolina, the nation’s ninth most populous state, home to 10.4 million people, more than double Louisiana’s 4.6 million. Early this summer, when Popeyes was attracting 35,000 visitors in Louisiana, it earned visits from about 9,800 North Carolinians in the equivalent time (about 3.5 to 1). To be sure, the cultures and demographics of these two states are not identical. But the greater market size in North Carolina, coupled with its diversity and not altogether disparate regional affinities, suggest there may be room for Popeyes to increase market share in the Tar Heel State.

By comparing census data with foot traffic data, Popeyes can understand which neighborhoods its visitors are coming from and build out audience profiles. Who are the people with whom Popeyes most resonates in Louisiana, and is the chain maximizing efforts to build its brand among those audiences in North Carolina? Could the company better locate Popeyes stores to capture the attention of North Carolina shoppers? Are there North Carolina metro areas the restaurant has not yet tapped where its primary audiences live in abundance?

In addition to the easy targets (the neighborhoods where the kind of people who already appear to love Popeyes live), are there untapped audiences to whom the brand can introduce itself? Are there neighborhoods in North Carolina where it seems Popeyes should be performing very well but isn’t?

Location intelligence can identify unexplained weak spots and show where Popeyes’ would-be customers are going instead, helping the chain understand its competitors and how to better compete.

Here are the top five US metro areas by population according to the 2020 Census:

By comparison, here’s Popeyes’ performance in each of these areas:

This is just one way to begin thinking about how Popeyes can use foot traffic data to understand its customers and increase performance. The restaurant might wonder why Los Angeles stores appear to be underperforming Chicago by nearly 18% despite having 35% more potential visitors. Is it a question of audience demographics? Are there marketing or menu design changes the company could execute to better cater to LA customers? On the flipside, is there a special connection between Popeyes and Chicago, which is nearly matching the performance of New York stores despite having half the audience at its disposal, that can be replicated elsewhere? Similarly, the gap in performance between Dallas and Houston is curious.

Are Houston's East Texas (i.e., quasi-Louisiana) credentials so strong that it should be outperforming the Dallas area by 66% despite being home to fewer people? Is the difference a question of local taste or greater investment on Popeyes’ part in Houston? Is there room for Popeyes to expand its footprint in the Cowboys’ home city?

Location intelligence could help Popeyes identify stores whose performance significantly diverges from nationwide and statewide benchmarks to understand where there’s room for improvement and where there are lessons to be learned from its current success. Foot traffic and census data could also help Popeyes identify neighborhoods where a new location might thrive while helping it steer clear of those where the chain will face an uphill battle.

Further research can answer the above questions, helping Popeyes exploit data to realize growth and win the chicken sandwich wars.

This is just the surface of the insights Unacast’s location intelligence platform can generate for QSRs, restaurant brands, and other brick-and-mortar chains.

Transparency - No more black box data solutions. Unacast provides the source IDs and source categories behind all of our geolocation data feeds to our clients, so you can gain further insight into the audience and feel confident about the authenticity of your location data.

Accuracy - We put all of our data through a strict cleansing process that includes deduplication, fraud detection and the removal of corrupt data and bid stream data. We gather geospatial data across multiple providers to ensure an accurate, full view of a user’s activity.

Visits dataset - The Unacast Visits dataset is a database of confirmed visits to known points of interest (POIs). The Visits data feed includes a timestamp, average lat-long of the venue, venue-ID, venue name, brand name, venue ID, city, state, zip-code, dwell time, SIC category, NAICS category and stock ticker. This dataset is a good fit for clients who prefer to work with location data that has been contextualized and thoroughly vetted on accuracy.

Pure dataset - The Pure dataset is an unfiltered stream of location and geospatial data that Unacast has aggregated from our suppliers. The Pure dataset includes a timestamp, the lat-long coordinates of the interaction, horizontal accuracy, IP address and source-ID. This dataset is a good fit for investment firms prioritizing volume, with the internal capabilities to attach POI, analyze and extract value from alt data in a raw form.

Neighborhood dataset - The Neighborhood dataset describes foot traffic trends, traffic patterns and insights for Census Block Groups. These features are derived from billions of location signals per day sourced with GDPR, CCPA regulations, cleansed, processed and aggregated to Census Block Groups. The aggregates derived are extrapolated and supply corrected such that the features describe the US population.

Home-based Origin-Destination Flux (OD Flux) derives moves from changes in home location of a device and therefore is able to capture the origin and destination of each move. In order to assess that a move happened with certain confidence, an observation window of several weeks (currently 8 is required, which means that our insights are more certain, however, come with a delay of approximately half of the observation window (4 weeks).

‍Population Distribution Trends (PDT) is a metric that measures the proportion of devices in each state or county at a weekly snapshot. When a mass of people moves from one area to another, the proportion shifts accordingly. This metric is useful for analyzing the momentary situation, as it has no delay. Compared to OD Flux it doesn’t provide information about directionality of the moves or their permanency.

Want to learn more about retail traffic counts and location analysis, or inform the retail site selection process of your next business location? Join the many people and companies in the restaurant industry that are using Unacast Now to measure the performance of an existing location, predict the performance of a new location, and do a better job of reaching their target customer.